[Japanese Movie Review] My Tomorrow, Your Yesterday (2016) : A Romantic Love Story of a Couple in a Parallel World

Japanese Movie Review - My Tomorrow, Your Yesterday : A Romantic Love Story of a Couple in a Parallel World

The movie Tomorrow I Will Date With Yesterday's You (My Tomorrow Your Yesterday) is about a couple who fall in love with each other, but at different times. This best romantic Japanese movie is set in a parallel world, which if we put a logic into it, it will be difficult for reason to accept because it is very imaginative. The duration of this movie runs within 2 hours.

My Tomorrow, Your Yesterday (ぼくは明日、昨日のきみとデートする Boku wa Asu, Kinō no Kimi to Dēto Suru) is a 2016 Japanese romantic drama movie directed by Takahiro Miki based on the novel of the same name. This Japanese movie stars Sota Fukushi and Nana Komatsu. The movie was released in Japan by Toho on December 2016

[Japanese Movie Synopsis] My Tomorrow, Your Yesterday : A Romantic Love Story of a Couple in a Parallel World

Once upon a time, there was a man named Takatoshi who met a girl named Emi. They met in a train carriage. Takatoshi and Emi looked at each other and eventually fell in love, even though it was their first time meeting. That's when they decided to date.

However, there is one thing that is odd, which is that the Takatoshi that Emi met is a different person. Takatoshi was not aware of this. He sometimes sees Emi cry at the wrong moment.

Takatoshi felt something strange about Emi. Emi could predict things that would happen to her and always cried whenever Takatoshi was kind to her. Emi also always refused to spend time with him after midnight.

After the two of them consummated their relationship on March 1st, Takatoshi found Emi's journal that he had left on the table. But the contents of the journal were very strange, because Emi wrote as if the time had gone backwards: the first page was March 16 and the last page was February 15.

The plot of Movie My Tomorrow, Your Yesterday (2016)

In this movie My Tomorrow, Your Yesterday, when Emi first met Takatoshi in a train car, the girl cried. Because it was the last day Emi met Takatoshi.

Whereas at the last meeting when Emi was painted, she smiled. But Takatoshi actually cried, because for Takatoshi it was the end of their meeting.

[Japanese Movie Review] My Tomorrow, Your Yesterday : A Romantic Love Story of a Couple in a Parallel World

Well... Although the idea of ​​this Japanese movie's story is similar to that of a western movie called Benjamin Button, where the man has a strange disease so that he is different in age and also has a time difference. However, I feel that the screenwriter of the movie My Tomorrow Your Yesterday is very different in packaging drama in his love story.

My Tomorrow Your Yesterday movie managed to earn a revenue of 1.7 million dollars. There are many ideas for romantic Japanese movies about parallel worlds, but I think this movie is the most memorable because it makes you think and makes it a bit slow to accept. Hehe

If you think about it, the idea is similar to the anime movie called Your Name. Just don't swap bodies. 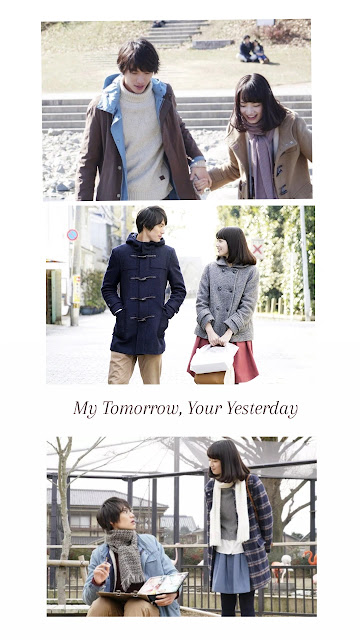 Then, this fragment that shows Emi and Takatoshi's closeness to me is really cute, considering that they can't keep up with each other unless Emi calls first. So the time spent together feels so precious.

Hmm... when I rewatched the movie again, I understood why Takatoshi and Emi were in deep turmoil because of the time difference that the two of them couldn't penetrate. This time distortion makes them seem to be in a parallel world.

It's like this... when you meet someone from the previous day, your memory will disappear because that person has a different time with you the next day.

The times in their lives are opposite each other that's what makes it strange. They can meet once a month every five years, at the same age of 20 years. In fact, Emi once met Takatoshi's parents and took a photo together.

The photos in Emi's wallet and diary were proof that what she said about the different timelines of the two's lives was true. Not more fiction.

I think this Japanese movie is really beyond prediction and a bit difficult to understand, but it's still interesting to talk about because it's really fun! My Tomorrow, Your Yesterday was the one that really worked for me. I also like the OST of the movie My Tomorrow Your Yesterday by Back Number. 😍

How about you? What is the title of your favorite movies that is very memorable? Please share in the comments column. ️❤️